We were in beast mode

Hey everybody! My name is Harry Schultz. I’m a Mathematics Major from Bloomsburg University. I needed a few credits so I thought that I’d see the world in the process. My family and friends fully supported me in this endeavor, which I appreciate very much. Let me just take this moment to tell everyone from home, my family, my co-workers, Thirst crew, Delta Pi and everyone else that I miss you guys very much.

So we’re one week in here at Peking University, Beijing, China. Let me say that again, BEIJING, CHINA! It is literally the other side of the world. It really makes you sit back and see how small a world we inhabit.

Let me just remind our readers that I am 25 years of age and have never been outside the country let alone on a plane! It is so like me to take my first flight as far as possible.

Here’s some of the view.

I’m not going to delve too much into our courses because I’m sure you will hear enough from others and learning the language is more of a bonus than a career necessity in my case. I’m meeting a lot of great people from all over the world on this journey. A few examples are China (obviously), Japan, Korea, Turkey, Holland, Canada, Italy, and even parts of distant America such as Hawaii and the West Coast. I bought a track phone so I could meet the locals and possibly some long term friends because who doesn’t want friends from all over the world?

Don’t fret my dedicated BU partiers. Some of the crew and I tested out the night life waters here as well. We tried out a few local places, quickly becoming regulars at a few. I even received a VIP card from a place called Laker’s. We are friends with the manager/DJ there already and will be sure to hang out there again very soon (I’m eating there in an hour!).

Another place called Lush had live music. The entertainment was very funny for me and my fellow Americans as we heard the singer using lots of American lines, mixing them into his music. It was outright amusing. We went to a place called V-Club that was very high class and well managed. The manager sent us a few drinks a few times throughout the night. Lastly we checked out a place called Club Wu which was your rave type of gathering. We danced a lot there, at least I did!

I’m taking Tai Chi every morning at 6:30 with Dr. Luo. It is a wonderful art. It is exactly what I need in the morning, relaxing and exhilarating at once. Let’s hope I never have to use it! I am also using the gym here as well. The food is tough to get by. Everybody rides bikes and carries umbrellas around in 100-degree weather for the shade! Chinese women are beautiful and oh there is so much to tell! But my mid section is screaming to go to Laker’s so I will continue this next week!

Quick note: I am filming everything. I run a company called Thirst Productions and will eventually be making a Thirst Adventures: Harry Goes To China Episode. So keep an eye out! Cheers. 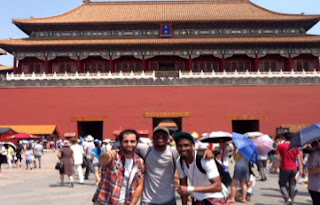 Hey everyone! Two weeks down. Our journey is half way and I feel like we have done it all! I’ve been throwing everything at my taste buds, from duck feet, to liver, to jelly fish, to unidentified substances.

But don’t worry, for every bad tasting item was balanced with a delicious one. I initially thought the second week was going to be monotonous and mostly boring with settling in the dorms.

How wrong I was.

Thursday night was an adventure all in itself. Other international groups, Clerk (made up of students mostly from the states but not limited) and Washington University invited us out to a club called Mix. Now this was our first adventure away from the University and thus our first cab ride as well. Mix was a high end club surrounding by other high end clubs. I personally had a great time there. Though it was a little expensive for my taste, the women were incredibly beautiful and I eventually came to the conclusion that the trip was indeed worth it.

Friday after class we immediately packed and went on a weekend trip. I don’t think I was ready for this exhausting trip but am of course very happy the trip occurred. From bus, to train, to bus we eventually got to our hotels where we ate dinner, pranced around in hotel robes, slept and finally checked out in the morning. It went by so fast! Our tour guides Suzy and Bruce were amazing people. They were extremely friendly, very helpful, and so dedicated to making the weekend interesting and exciting for our group. I hope to stay in contact with them for the rest of my life.

Saturday was a day to remember. We hiked, no, climbed Mount Tai, the birthplace of Confucius. There were 6,668 steps. When I arrived with this epic challenge staring me in the face, I simply looked up, and announced, “I’m getting to the top”. My ever fit friend Andy accompanied me on this journey and we were the first to get to the top doing it in about one hour’s time. We were unable to make it to the top before the monstrous thunderstorm rolled over us.

But lucky for us we were in beast mode and accepted the downpour and roar of the storm with smiles and grunts. I was offered a poncho at one point where I simply gave a strong man pose and moved on with my task.

After eating dinner at the top, I focused my thoughts on the down climb (just as difficult) and eventually with much inner turmoil succumbed to the likes of the poncho (I was in only a tank top) thinking I would regret my stupefied bravado if I somehow got sick for the rest of the trip.

I was second to make it down, second only to the one and only Devon. Bodies by Harry. It was a journey to remember and to watch once I put my videos together in the next Thirst Productions video “Harry Goes To China.” We eventually made our way to our second hotel, a five star hotel might I add. The rest was only short-lived as we arrived late and had to wake up relatively early. 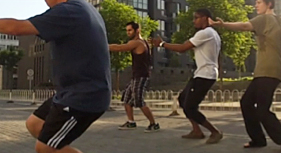 But do not fret, we made sure to enjoy what we could with the little time we had. The night was filled with funny conversations and struggled sentences.

Sunday morning after a breakfast buffet we were led to the continued Confucius tour. We first viewed Confucius’ temple.

At his temple Devon, Chris and I did our usual handstands, back-flips, and pushups, this time with a surrounding crowd. The place was enlightening. We then went to his tomb where Devon and I meditated and practiced our Tai Chi, respecting the dead as we did. I haggled for my first time, bringing an initial price of 70 yen to 40 yen having to walk away twice for the bargain. Eventually we made our way back to PKU, waving our goodbyes to our guides with Godspeed in mind.

Sunday we were ever glad to get back to PKU, exhausted and in much need of sleep. It has been such a journey so far and as I said we are only half way there. I look forward to the Great Wall this weekend where we will surely do it justice with our push-ups and back-flips. Thanks for listening. Until next time, cheers.

Posted by BloomsburgU at 5:51 PM