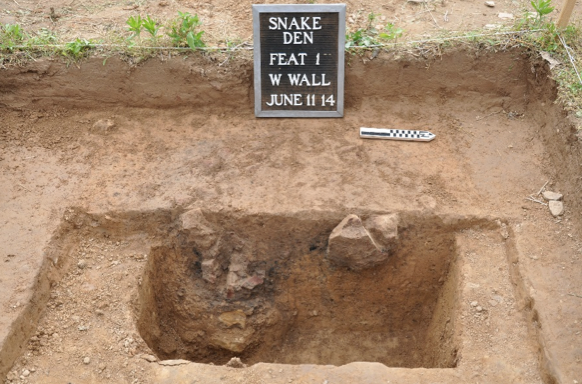 The last few days in Ohio were possibly my favorites among the entire field experience. A few of the fieldschool students were relocated and assigned to work at Snake Den (and I was among that group), while the remaining students stayed to complete excavations at our main site – the Balthaser Home Site.

(DeeAnne Wymer) - The Snake Den earthwork which is located a few miles north of the Balthaser site and sits on a high plateau overlooking the valley may have been the ceremonial center for our people who had lived at the Balthaser site homestead some 1,800 years ago. The earthwork includes an embankment and ditch outlining the plateau with mounds and other traces of ceremonial activities inside the embankment. 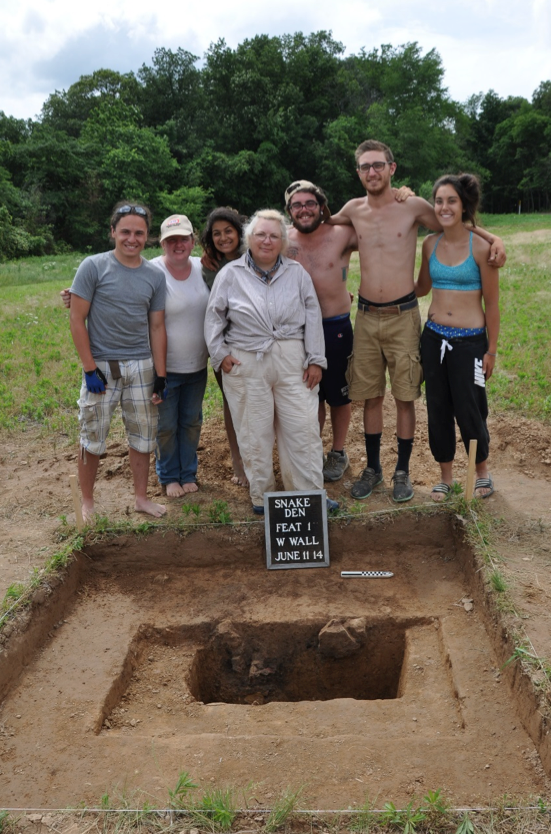 In 1907 a few "archaeologists" excavated the Snake Den Mounds without real proper care of the site. Techniques for digging were not as precise as they are today. In this year, silver nuggets were discovered within one of the mounds and taken off the property without notifying the landowner. To shorten a long historical background surrounding Snake Den, there is only one piece left of silver remaining at the state museum in Columbus, Ohio.

(DeeAnne Wymer) - It looks like this was the only officially noted early exploration of this earthwork and it has remained virtually untouched since that time – protected and cared for by a great local family – the Barrs.

One can only imagine the excitement to be assigned to work at this site. It's been many years since the site has been excavated, properly at that, and to be one of the first students to work on it was a good feeling. The last few days during our time in Ohio we were split into groups to “open units” at this earthwork site to ‘groundtruth’ the results of a new technique now used to ‘see’ below the ground before excavation.

(DeeAnne Wymer) - Dr. Jarrod Burks is the third archaeologist who works with Dr. Pacheco and Bloomsburg’s Dr. Wymer on these Hopewell moundbuilder sites. Dr. Burk’s uses magnetometry which senses slight changes in the magnetic field just below the soil, creating a map of potential features (pits, earthovens, etc.) for us to explore – any disturbed or burned soil, for example, will have a higher magnetic reading.

Our groups were placed in 1m x 1m test pits that showed high readings on Jarrod Burks' magnetometry results. Within 20 centimeters and less than an hour of digging we found a few bladelets and flint ridge flakes typical of the Hopewell culture of 100 B.C. to A.D. 400. This was good news for us as it meant that we were definitely coming across something good.

(DeeAnne Wymer) - This unit had been placed over a mysterious circular ‘blob’ revealed by the new sensing equipment that showed two long rows of large (3 foot in diameter) circular features, lined up almost like an avenue, that went from the center of the earthwork to the south outside the area that had been surveyed for magnetic readings.

After a while of digging we found charcoal and we immediately thought it meant it was a ceremonial fire because of its location and the amount of items we had come across. After we exposed the feature more and more and plan mapped it, it was time to cut into it and see what we could find. 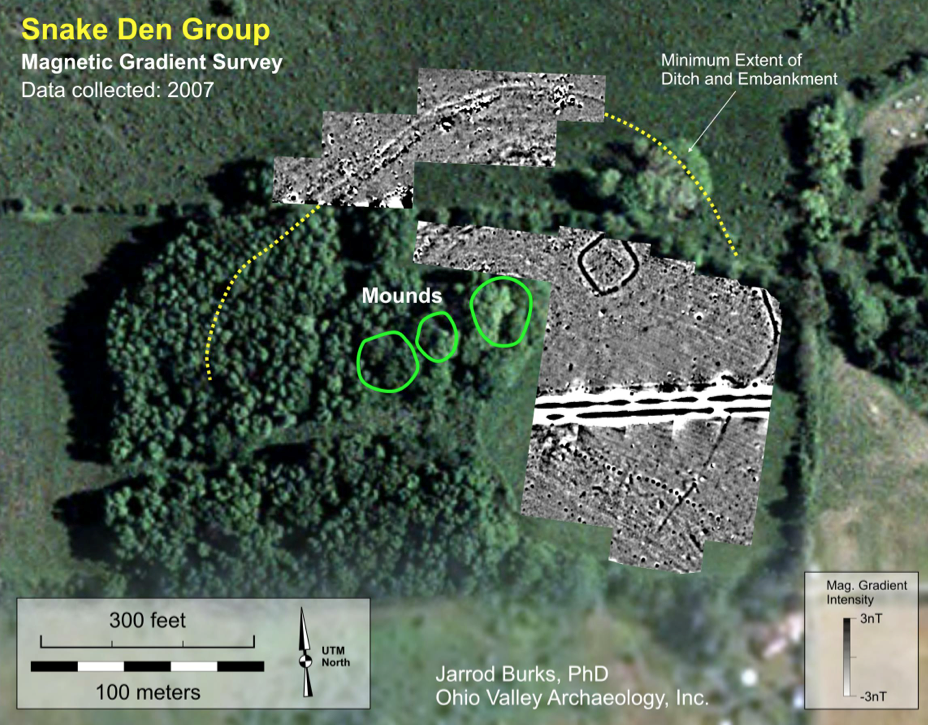 Properly cutting into the feature meant leaving one half untouched so we could see what the feature would look like as a whole (the profile reveals the interior/internal ‘shape’ of the ground disturbance made by these ancient peoples). After much digging (around 60 centimeters into the dirt) we finally realized that we had come across a giant post mold that measured around 90 cm. (nearly 3 feet) in diameter.

What was even more exciting was that it was the biggest one ever found! We were all pretty happy, as by the time the feature had been fully exposed it was our last day out at Snake Den. It felt like we were really part of history because the site remained untouched for so many years. It was truly an honor to be a part of the first team to really have worked on such a site even if it was just for a few days.

(DeeAnne Wymer) - But what also made this special is that the landowners were so interested and so pleased by our work that they want next year’s fieldschool to come back to the site for further exploration.

I cannot think of a better way to have ended my experience in this field school. The last day was backfill day and we all worked together to close down the units and refill our units created by our hard work. It was a bittersweet feeling to leave but I feel as if my time spent in this field school was truly wonderful and worthwhile. I have never felt more confident that Anthropology is what I was meant to do.

Being in a site of around 2,000 years old can be a truly humbling experience. The way people lead their lives, how they function as a society and what is important to them, past or present, is something that I feel will always be important. We are different, and we are alike, and truly understanding the diversities of people and what it is to be human is truly stimulating to me. I learned so much about myself, as well as understanding the field of archaeology and that's all I could have asked of it.

Posted by BloomsburgU at 9:48 AM