Intramurals ... more than just a game


Growing up I always loved playing and watching basketball. In middle school, I played point guard for my school basketball team and was actually good. Instead of continuing my love for basketball in high school, I decided to get a job and play basketball in my spare time.

My freshman year of college I went to the Student Recreation Center a lot to play basketball, and I would hear a lot of upperclassmen talk about intramurals. After hearing what intramurals was about me and group of my friends decided to make a team and join the competitive league.

Playing intramurals basketball provided a different experience from just playing in the rec, because the games are recorded and put on YouTube, teams can buy jerseys, and they hire referees and train them. What surprised me the most was that anyone could play, usually in basketball leagues people would have to make the team or tryout to prove their skill level before they can play.

Over time intramurals turned into more than a basketball game for me. 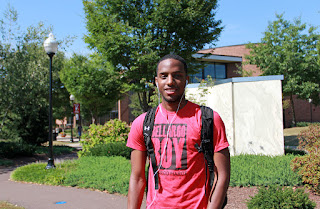 Intramurals became something fun to do with friends. Instead of just hanging out with my friend’s intramurals allowed us to build a stronger bond by working together to win. What makes intramurals so fun is the competitiveness everyone wants to win every game and make it the championship.

Every game a lot of students come out, which makes people play harder and want to put on a show for the crowd. Also if you win the championship you get a t-shirt but in the gym the t-shirt actually has meaning and shows everyone that you earned the t-shirt by winning the championship.

I am happy that over the course of my last past three years at Bloomsburg I had the chance to participate in intramural sports and will continuing playing my last two semesters.

Posted by BloomsburgU at 6:46 AM