Where the gypsies live 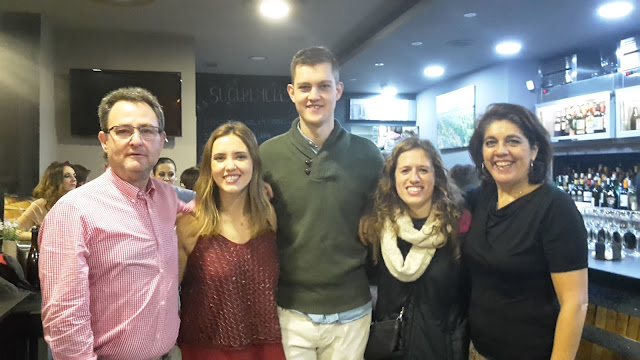 I still can’t believe my final week in Spain is over! I will miss all the friends I have made, the family I have been staying with, and Granada in general! I feel as if I have only just got here.

On Monday I went out for paella with my friends. Paella is a customary dish in Spain. It is usually shared with people and comes out in a large pan. Paella can be many different flavors from black rice (octopus) to a seafood or vegetarian paella. They always contain rice and different seasonings, seafood, or vegetables depending on the type. Eating here is a very social activity and when going out to dinner you can almost guarantee that it will take you at least two hours.

Tuesday we went horseback riding outside the city. A fifteen minute bus ride will take you out of the city and close to the mountains and the river. A group of students and I rode horses along a walking trail by the river. It was very beautiful and relaxing. The houses are all built along the mountains here and the views are amazing from up above in the country side.

I saw a movie at the theatres in Spanish on Wednesday. My friend and I saw Fantastic Beasts and Where to Find Them. It was a little hard to follow in Spanish because they speak quickly, but overall I could understand the story and learn a few new words in Spanish. In movie theatres here there are assigned seats and they are fairly cheap in Granada (only 4 Euros). 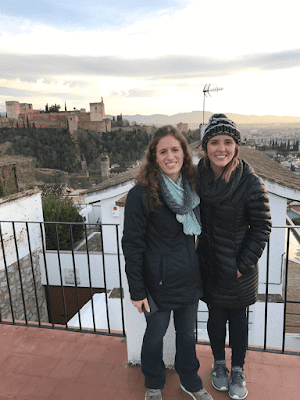 Thursday we went to Flamenco in a cave in an area called Sacromonte. This area is where many gypsies live inside caves built into the mountain. The caves are amazingly beautiful and surprisingly warm in the winter here. The flamenco show lasted almost two hours and was incredible to watch. I was extremely close to all the dancers and they moved so quickly and elegantly. Before seeing the show the group I was with had an hour dance class in Flamenco. It was extremely hard to do and learning the rhythm in the songs is not easy!

On Friday I had my final day of classes and had to say goodbye to my professors, friends, and host family here in Granada. It was hard to say goodbye, but we ensured each other that we would talk and whenever I visit Texas, Italy, Spain, or Korea I have people to visit.

My experience abroad has been eye opening! Living among another culture and language other than my own has been very fun. The people here have been so friendly and patient with someone who cannot speak perfectly. I have met so many amazing friends and this experience has propelled me to continue learning Spanish.

When I had wanted to say something to my family and I didn't know how, I would make it a goal that day to learn so the next day I could perfectly tell them what I had wanted to say. I can honestly say my experience here has been life changing!

I now know what it feels like to be lost in a country and have no idea how to ask for help. It has given me much more compassion for others and helped me to slow down and enjoy life a little more. I would recommend studying abroad to anyone no matter what level of language you know. My Spanish has improved vastly, and going to Spain has given me more knowledge and experience than any one class could have provided me.

Some fun facts about Granada ...

Racquel Kreischer is a senior engineering major spending this winter break studying abroad in Granada, Spain. Through the Instituto Mediterráneo Sol Granada she is studying Spanish while living with a Spanish family learning up-close about Spainards lives, language and culture.