A glimpse back through Norwegian times 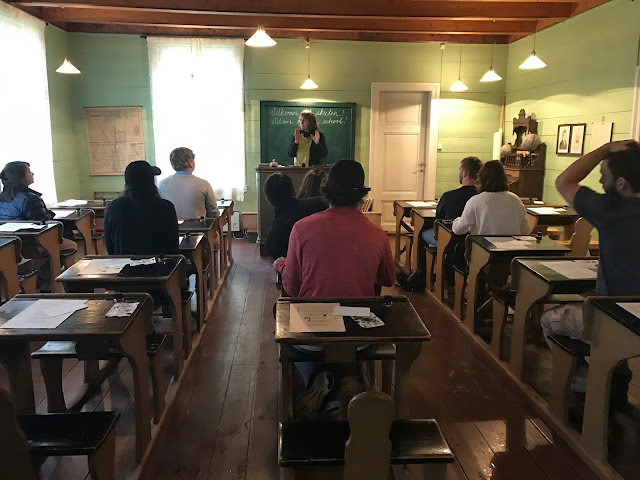 Today following a short drive we found ourselves in the small village of Kaupanger along the immense Sognefjord. While there, we visited the Sogn Folk Museum where we, guided by the gracious Ms. Anna Avdem, were given a glimpse into various time periods through the lodgings Norwegians would dwell in.

In one memorable home, an 18th century farmhouse, the residents were forced to utilize wood to create all of their possessions from shoes, furniture and utensils, and they did so with amazing ingenuity. We also were treated to a "class" with our wonderful tour guide presiding as instructor and together we sang a traditional children's school song. This experience was both mentally stimulating and thoroughly enjoyable, adding to the joy of our adventures in Norway!

Nestled within Norway's southwestern coast, surrounded by titanic fjords and emerald mountains lies the wharf town of Bergen. The first stop on our trek through the wonders of this beautiful country and Bergen does not disappoint. 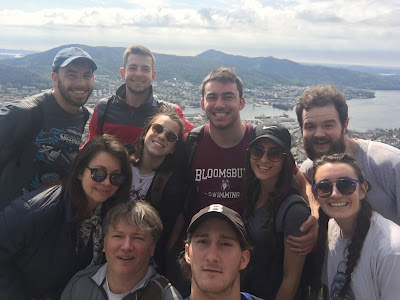 Ranging from exquisite cuisine not found in our own united states, notably the decadent whale steaks and burgers, to a rich historical inheritance. Our journey into Bergen's past began at the Bryygan museum where we beheld articles of encounters with ferocious fires, displays of garments, tools and medical practices of a time long lost.

Following this rewarding experience our next brush with Bergen's heritage was found as we ascended the medical fortress of Rosenkrantz tower, through thin corridors of stone until we reached the peak, and for our efforts were rewarded with a spectacular sight of Bergen's Wharf, the azure waters cloaked in mist as they expanded outward to the ocean's welcoming embrace. Though we soon will depart this wonderful town, the sights that await us keep our spirits high and excitement abound! 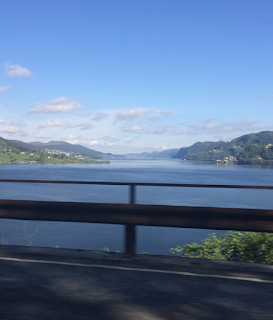 We set off on the European Route E 16, a very scenic drive that stretches west-east across Norway. Along the way we saw sights such as great pastoral farms, surreal fjords and the waterfall Tvindefossen. The latter part of our journey took us through the Lærdal Tunnel, which, at 24.5km, happens to be the longest road tunnel in the world!

The tunnel is so long that the architect feared for people falling into a hypnotic state while traveling through the tunnel, so he hired a psychologist to help him build structures that would keep drivers awake.

These structures came in the form of lights, which simulate a rising dawn. Finally, after about five hours, we ended our journey in the picturesque, fjord-side town of Luster.

Aaron and Evan Llanso are among a small group of eight study abroad students led by Ben Franek and Laura Mock, of the Department of Environmental, Geographical and Geological Sciences, spending three weeks this summer exploring the physical and cultural landscapes of Norway. Among the planned experiences include seeing the midnight sun, the majesty of Norway’s fjords and Viking artifacts like a 1,000-year-old ship.

Posted by BloomsburgU at 9:39 AM