Sociology trip to Hungary starts with a box, ends with a community


We literally stood around a box as though it were a sacred artifact while we waited to get our tickets and go through security at Philadelphia International Airport. From that point on, The Box became pretty important. Everyone was safely at the airport, and we were all through security and waiting at the gate without any hitches or problems. This worried Dr. Podeschi. Things were going too smoothly. But then they didn’t. Our flight was delayed and we were relieved (right?). We felt like something bad needed to happen, and a small bad is a good bad. Or perhaps we angered The Box. Time will tell.


During the delay, airline personnel continuously called for Schmidt, Lazerhead, and Jealousy over the intercom. We’re sure of only two of these names, but that doesn’t matter. The second will always be Lazerhead. Anyway, we assume these three are now dead (or missed their flight or decided to not go to Madrid).

Now the real traveling. Dan's attempt to join the first class passengers was rebuffed. Dan and Sarah attempted to befriend the flight attendance and were rejected. She was all business. And a stranger slept on Katie's shoulder. Jackie slept in an odd, no . . . worrying position. Sam did not (sleep, that is). Once off the plane, we reconvened around and touched The Box to show proper respect (as one does). 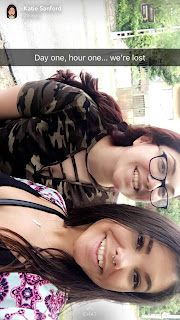 Then, thanks to The Box we got our luggage quickly. Nick must not have really been feeling it when he touched the box because he mistakenly withdrew a lot of Hungarian money on accident (let’s just say that if it were 1989 he could have bought a small house in the Budapest suburbs - literally). Same with Katie and Andrea: they learned a tough lesson about currency exchange. Inexplicably, Megan felt her exchange was fair. Hmmm. Perhaps she had a special connection to The Box.

On to the Hotel Jagello, on the lovely and hilly Buda side of Budapest. One group was on a shuttle to the hotel in silence and fear. The driving was a little more aggressive in Hungary than what we're used to. Members of the other group thought that Dr. Podeschi planted an undercover sociologist as their driver, because the conversation was so cool and interesting.

Once we arrived at the hotel we paired up and entered our rooms. Stew ran into an issue when he couldn't figure out how to turn on any of the lights in his room. He managed to relieve himself in the dark without too much trouble (or mess). Then Dr. Podeschi texted everyone about how the key to the door was also the key to the electricity for the whole room. Details Podeschi, details.

After the long flight, the group diverged into three. One portion wanted to rest. Another decided to find food and got lost, but found ice cream and a nice man who taught them how to count Hungarian money.

The rest took a hike through a park to a statue and then got lunch. They also learned a bit about Hungarian restaurant norms (e.g., the wait staff are not in a hurry, they don’t come back to ask you if you want another of something).

The group then all met back up to take a tour around Budapest with Bertalan (call him Bart) the wonderful former University of Pecs student who just finished his master’s degree in International Relations from Corvinius University in Budapest.

Bart informed us about much of Hungarian history and current politics in Hungary, all while showing us some of the main sites in downtown Budapest.

And there was a bit of a thrill at the beginning of the tour: an undercover security agent abruptly interrupted us next to the parliament building, telling us to stop because the Prime Minister was coming. Then two black cars rushed by in front of us and stopped at the side of the building. We didn't see him but Bertalan confirmed that it was indeed Viktor Orban's black armored van! We were a bit shocked because there was so little security.

Later on the tour we also observed a dog park and discovered the well behaved, unleashed Hungarian dogs. All of the students were enamored by the dogs, particularly Sarah “Good Boy” Johnson.

So far so good. Days since Sarah has pet a dog: 1 day.


Led by Christopher Podeschi, associate professor of sociology, a group of Bloomsburg University students spent 10 days in Hungary this summer studying first-hand the Hungarian culture, history and identity. The study abroad trip was part of Podeschi's spring collaborative online international learning course, Seminar on Identity and Locality, which included videoconferencing during the semester with a class from the University of Pecs. The abroad experience also featured visits to Budapest and a rural Hungarian community that provided social and cultural context explored during class discussion earlier in the spring.    #CollaborativeLearning #HuskySummer #HuskyAbroad

Posted by BloomsburgU at 9:39 AM