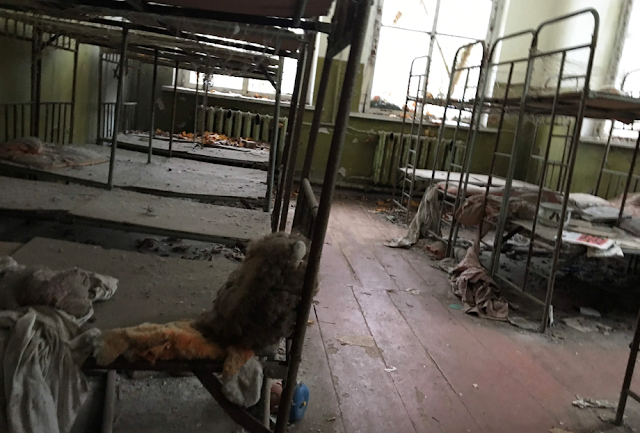 When we awakened after our first night in Kiev, it was dark. The tour begins at 8 o’clock, breakfast is served at 7, so naturally, we awakened at 6. After chowing down on some wonderful hotel-given food (and coffee… so much coffee), we boarded the bus headed toward the most damaging nuclear accident in history: Chernobyl.

Our extremely helpful tour guides, Tania and Anastasia, presented to us a brief safety talk, as well as some history of the site.

One of our first stops was to the abandoned kindergarten in the exclusion zone: Kopachi Kindergarten. The inside of the building is eerie. It was so clearly lived in, only to be totally abandoned. Dolls are left out of place, some half-buried in the dirt in the front garden; some pensively looking through the dirt-covered window. Posters teaching the Cyrillic alphabet falling off the wall; open books teaching basic grammar like a Soviet Jack and Jane.

After a wonderful lunch consisting of potato soup and roasted chicken, we delved further into the exclusion zone. It is important to note that the radiation endured through the tour was only marginally above the background radiation experienced just through everyday life. There are, however, hotspots scattered throughout that our guides pointed out and led us through unscathed. The highest amount of radiation we encountered was in Pripyat, the abandoned town close by, which will be discussed a little later. The tour led us 200 meters away from the reactor, well within what 30 years ago would be deadly to stand in for as long as we did, but the cleaning crews following the meltdown has reduced the radiation in the area back to safe levels.

Below is a picture of me standing that 200 meters away, the reactor itself is covered by an absolutely massive complex that is the largest moveable structure in the world. The reason for its mobility was for the safety of the crew who constructed it; the length of time it took to build would have dosed the workers with lethal doses of radiation relatively quickly, which doesn’t look good in reports. The Soviet Union or any following governmental institutions have avoided releasing any studies on the full casualties of the accident, but estimates place the victims at well over 10,000 people that later died of cancer and other complications due to high radiation intake.

After our visit to the reactor, we made our way to the abandoned city of Pripyat.

The Soviet leaders neglected to tell the inhabitants of this worker’s town for three days following the accident, and additionally led them to believe that the city would be inhabitable in the not too distant future. Alas, thirty years on and human life is still no fully sustainable in Pripyat, its abandoned buildings slowly falling apart from decades of neglect; an eerie reminder of the lives its inhabitants left behind.

The most famous attraction within Pripyat is the abandoned amusement park in the center of the city. Ironically, the park was never officially open, it was set to be unveiled five days after the accident. It’s rusted ferris wheel and carousel now lie rusted and totally unused, containing the most radioactive areas of the exclusion zone and the tour. The background radiation within the exclusion zone was approximately 0.3 µSv/hr. A piece of debris on the bottom of one of the carriages of the wheel measured in at over 500 µSv/hr.

As a physics major, I found the tour of Chernobyl quite enlightening. It shows that even the best of intentions and discoveries can be warped by power-hungry megalomaniacs. This accident has placed a stigma upon nuclear fission power plants as being unpredictable, but as long as the safety measures are all in place (the Soviet scientists had turned them off at the time of the accident), it is by far the cleanest form of energy we currently have. Unfortunately, the horrible result of this plant’s meltdown has permanently tainted the view of this form of power.

— Andrew Clickard, a freshman mathematics and physics dual major, is studying abroad this winter for four weeks in Eastern and Central Europe, taking trips to the Schindler's Factory, the Wieliczka Salt Mine, and the UNESCO World Heritage Site Auschwitz Concentration Camp. #HuskyAbroad #ProfessionalU