It was finally time for the Peking duck dinner! The restaurant was not far from PKU, and its interior décor was gorgeous with glimmering chandeliers, thick purple table napkins, and a well-dressed wait staff.

The dinner consisted of a lot of interesting dishes that are not really served on campus or in restaurants we have gone to so far. Of course there was the Peking duck, which you were supposed to eat with a wrap filled with sauce, cucumbers, and onions. This was delicious, however, the duck’s feet were not. The duck feet are served cold and have a very rubbery texture. This mixed together in my mouth was not very appetizing. Normally I can eat a lot of different kinds of Chinese food, but I will not eat duck’s feet again.

There was no rice or noodle dish served during this dinner. The 主食 (zhu shi - staple food) of this meal were some small cakes served at the end. One cake I tried was filled with some sort of meat, possibly duck.

I also was one of the winners who won the rock-paper-scissors challenge for the two serial numbers of the ducks we ate. It was a small postcard with the duck’s serial number written on it. I was not really sure what to make of this souvenir except that it holds good memories, and the challenge was very entertaining.

From A Small Chinese City To A Big One 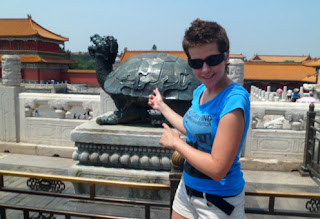 After participating in the Beijing language study abroad program at PKU last summer, I was pretty confident and excited to enroll in Chinese again and study at a higher level than last year.

I have also been working in China as an English teacher for a year and studying Chinese somewhat intensively for about a year and a half. This and my familiarity with the program has really made my own perceptions of PKU and China as a whole different from many others studying here for the first time.

I remember when I first came to Beijing last summer before I started teaching English in Zibo, I was scared out of my mind during the first night. I knew that I would not be going home any time soon. But this time, other than adjusting to the change of the big-city environment, I really felt no different on the first night of the program than if I were to sleep in my teacher’s apartment back in Zibo.

I feel my own perceptions and understanding of China and the Chinese language differ greatly from last year’s. Of course, the time spent working and living in the culture has had an enormous influence on this. Working at Shandong University of Technology has allowed me to live in the “Chinese” world because it is located in Zibo City, a small city in the Shandong Province, and there are few foreigners except for the foreign teachers at the university, primary schools, and a few other foreign workers for various companies such as Siemens. When you go anywhere in Zibo, very few adults speak enough English to hold a casual or functional conversation. Whereas in Beijing, many Chinese natives speak at least some English, and it is often easier to get around as a non-Chinese speaker as opposed to in a smaller city.

There of course are some wonderful opportunities and venues for foreigners in Beijing. As a foreigner, one could even possibly get around without knowing hardly any Chinese or making any Chinese friends. I am not saying that as a foreigner you cannot be completely immersed in the Chinese culture in Beijing due to the high amount of foreigners, but after living in Zibo and comparing it to my time in Beijing so far, I definitely think it’s easier to really get immersed in the culture and language when you are not surrounded by other foreigners.

Since I have been working in China for a year, I decided that it was now time to put my Chinese language skills to use and help others with interpreting/translating whenever I can. I had recently passed the HSK IV exam, which states that I know roughly 1,200 Chinese characters and that those who passed HSK IV can communicate and travel in China, and I can talk to native speakers about a variety of topics.

I also have been doing interpreting for my fellow peers in the BU group since I have some experience with using Chinese. During the first week, I did some basic translating/interpreting for the BU group such as reading menus, helping everyone buy and add minutes to cell phones, and asking for information about campus facilities and directions to places.

I think when I go home to the US for a month after this program, I am going to miss this part of the adventure in Beijing. Since I am somewhat familiar with life in China, helping others get around when they need it is not a bother to me. Doing this also gives me a scope of what language/aspect skills I am currently very good at and others that I need to improve.

By the end of the trip, I hope everyone’s Chinese will have improved so that they are capable of doing what they need to do and are confident enough to use the language in various situations. It should be an interesting time watching everyone (including myself) progress with Chinese. 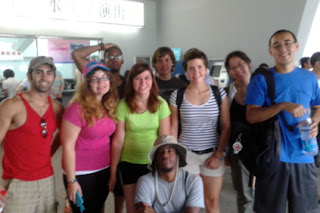 I often cringe when I hear the character “儿” so much when working with Chinese.

However, in the PKU classes, this is common because classes are taught in the Beijing accent, and this is one distinguished linguistic feature of the Beijing accent. It sounds like “er” and makes the words it is added to feel odd to me.

Maybe I’m just picky or pay too much attention to things. Maybe I just think it makes everything sound rougher. Also, I speak Chinese with a mild Shandong province accent because I’ve been living in Zibo for a year and they don’t use 儿 as much. I am also starting to pick up on the finer points of Chinese pronunciation that I haven’t really noticed before. It really is difficult for Americans to pronounce a lot of the sounds in Chinese language. My spoken Chinese teacher always makes faces when she is emphasizing the difficult sounds or when students mispronounce them.

Thinking about the accents and dialects are fun because in China, sometimes Chinese people have trouble understanding other Chinese people due to the multitude of dialects. I hear people all the time in public saying “What?” when they talk to people on cell phones. Given that the number of dialects is a powerful distinction where people must learn “Putonghua” in school, I don’t think bad cell phone service is always the cause of this.

As a second language learner, the standard Chinese 普通话 (Putonghua) sounds great if spoken clearly. The news anchors on the CCTV news do this, and it is very smooth-sounding to me. Then there are other people who seem like they blur all of the words together when they speak.

Even though the standard Putonghua sounds good to my ears, there is also an advantage for being able to listen to and try to understand and appreciate dialects and accents in the people’s speech.

This was definitely my most memorable Mount Tai climb because a massive thunderstorm occurred about halfway up the mountain.

We all started to climb together, but soon everyone was separated into small groups because some moved at a faster pace than others. I ended up climbing with April and Ashley. I carried the umbrellas, water, and other supplies since I was the only one who brought a backpack during the climb. We agreed that we would all take turns carrying each other’s water and other things during the day trips.

As soon we completed about 1,500 of our 3,300 stairs of Mount Tai, the sky suddenly opened up, and rain heavier than the Beijing 暴雨 ( torrential rain) poured all over us. Soon after, close range thunder-cracks and lightning flashes flickered before our eyes and echoed in our ears.

Ashley wanted to get to the top of the mountain as quick as possible, so she went ahead. I walked with April going up the rest of the mountain, and she felt electricity surge through the handrail after the loudest thunder-crack.

Soon after we made it to the top, Ashley told us she had seen lightning strike the ground close enough to see the sparks from it hitting the mountain. We were still some of the first people to make it up the mountain despite the treacherous weather. Bruce and Susie, our tour guides, were both so happy to see that we had all arrived safely.

Eventually everyone arrived at the top with soaked clothes, bent umbrellas, and exhausted legs. We then all had lunch at the top of the mountain. During the descent, the girls walked together and sang songs to keep our minds occupied as we all tried not to slip down the mountain. Luckily everyone made it down the mountain safely, and we all had a really memorable climb up and down Shandong Province’s most famous mountain.

We went to Qufu to see Confucius’ home and tomb the day after we climbed Mount Tai. Everyone was tired from the previous mountain climb, but we all still managed to enjoy the ancient history and monuments found in Qufu, the ancient capital of Lu area.

I especially enjoyed seeing the cemetery and tombs that contained Confucius’ family’s remains. This is located in a wooded area and is a big change of scenery compared to Beijing. This was my third time seeing this place, but I still tried my best to get something out of it. What I got was a different perception of the place itself. I could sense that my knowledge of China had increased compared to the previous years, and yet all of those ancient remains really haven’t changed. That’s just how time works.

I also helped some of my friends buy hand-written scrolls that read some of the ancient Confucian teachings. I loved watching calligraphers write the scrolls, and I understood some of the words even though they were written in an ancient format.

Finally we reached Confucius’ tomb, and it was decorated with all sorts of flowers. Our tour guide said that students now on summer vacation had decorated the tomb. In Confucian teaching, studying (if you are a “good” person) is regarded with upmost importance. I thought it was interesting that the students, whether or not they are aware or fully understand the history or Confucian thought, pay homage to Confucius by leaving flowers on his tomb.

Posted by BloomsburgU at 7:04 AM