A walk through the garden

One of my favorite experiences since being here was our exploration of what I like to call “The secret garden.” It’s not really a secret, but it is tucked away in the north side of Peking University. I like it a lot because Beijing is a very industrialized, constantly on the go city, but here in this garden it’s very peaceful. It’s actually a lot closer to what I always imagined Chinese life to be: calm, peaceful, relaxing. 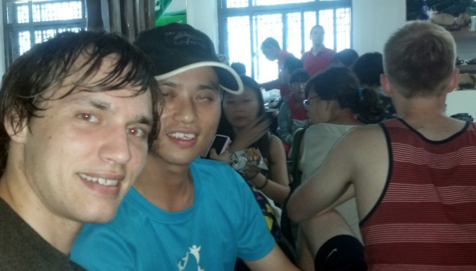 In this garden there are a lot of cool things. For example there is a giant water tower. Now of course, we don’t think of a water tower as something to write home about, except this is no ordinary water tower. It’s very ornately built, very much like the Chinese architecture we see in Chinese Kung Fu movies. This garden is situated around a large pond; in this pond is something called the marble boat. It legitimately is exactly that: a marble boat. It was cool just to stand on it and relax. The reoccurring theme here is peaceful. The garden was full of older Chinese buildings with the more traditional architecture, which is one thing I really love about China.

On our way out of the garden we (Joshua Meyers, Ed Davis, Jackie Simon, and Ashley Boehmer, and myself) were stopped by an older Chinese man and his grandkids; they wanted to take a picture of the Americans. It was fun, and they were very nice and friendly. Although, that was an interesting experience because not too many people stop and take your picture randomly. Overall, walking through the secret garden felt to me like a very “Chinese” experience, and it was a great experience to share with my friends.


I would first like to start of with this statement. Living in China is not at all like living in America. One major difference is an obvious one: the language barrier. Virtually no one in Beijing speaks English, and those who do are not fluent in it. Even simple things like ordering food suddenly become a challenging undertaking. You really gain a unique perspective on the things that seem so natural to do at home like ordering food, buying everyday supplies, or connecting to the internet. 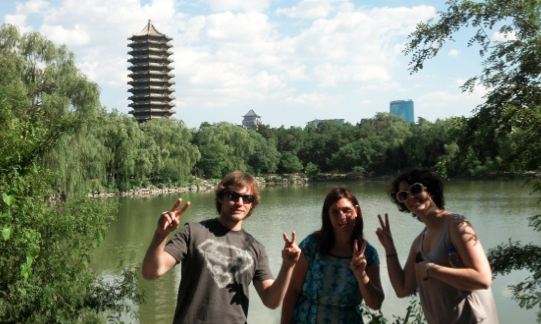 Only by getting out of your natural element can these seemingly easy things be seen as a valued privilege. Ultimately the China study abroad experience has been absolutely fantastic; one of my favorite experiences thus far has been attempting to eat at what we have started to call “The noodle house.” Keeping pace with the fast moving life of the Chinese people has not been easy, and lunch time is no exception. Lunch on one of our first days was perhaps one of the most frustrating ordeals I’ve ever been through. All we wanted was to eat some noodles, however one thing about China food place is all of their menus appear to be in Chinese, go figure.

Right as we walked in it became very clear we didn’t understand the language at all. Everything on the menu was in Chinese; we witnessed other Chinese people getting noodles, so when we went up to the lady who would get our noodles we tried to explain what we wanted. So we tried saying what we wanted in Chinese, but everything we asked for they didn’t have. Everything is so much more difficult here. Don’t get me wrong though, I love everything about it, the challenge, learning the language, making friends with new people, everything. One thing I do miss though is American food.

Never thought I would say that, but there is not a whole ton of sweet stuff here. Not that that’s actually a bad thing, it is clear that Chinese people eat a very healthily. Even the “sweet” stuff is way healthier tasting than American sweet stuff, which is interesting to me. Living in China for one week has already opened my eyes to so much stuff, and I’m looking forward to continuing my education here. Lastly, the weather here is awesome, it’s always hot. You never have to worry about wearing a sweater here; it has been over one hundred degrees consistently. Live long and prosper humanity!

Tiananmen Square and the Forbidden City 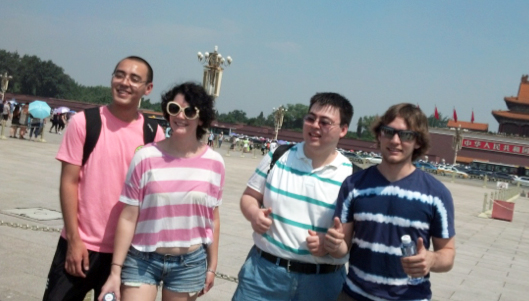 This Saturday we had the opportunity to walk through the Tiananmen Square and The Forbidden City; both important pieces of Chinese history. Tiananmen Square was very cool. One thing that was really interesting was learning a little bit about the buildings that are on the 100 Kuai (Chinese Dollar). Another thing that really struck me as being particularly interesting was the large number of vendor/salespeople out. They were all selling something, whether it be ice cream or little umbrella hats. They’re also quite aggressive, there was one moment where our group was standing in the middle of the Forbidden City and we were attacked as if we were dead meat and the salespeople were vultures.

That was a very different experience. The Forbidden City was particularly interesting to me because of the Chinese architecture, it’s so unlike anything we have in the United States. It’s amazing what people were able to build without the technology we have today. Overall, I really enjoyed walking through these two areas, and I’d highly recommend anyone in Beijing to check it out. 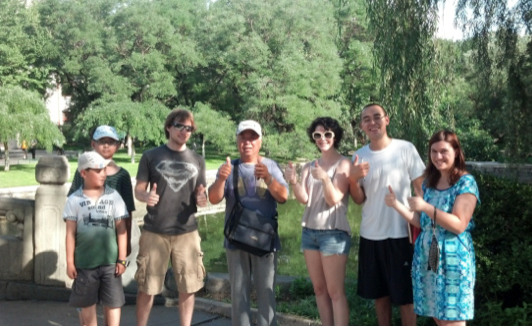 While being here I have had many opportunities to barter with Chinese vendors on the street. Bartering is an interesting concept for me, especially because it’s not something that I’ve ever really seen in the states, at least not in the areas I’ve been in. Everything in America usually has a set price and that’s that. Not in China. One such experience was on our walk back from the Chinese KFC (which is another story in and of itself) we stopped at a random street vendor. This vender had a bunch of random figurines and jewelry. At the time I was with Ed Davis and Joshua Myers. We were looking at buying these small elephant figurines for people that like them in our respective circle of loved ones. At first the vendor said that it would 120 yuan (which would be about 20 U.S. Dollars), of course the language barrier was at play here as well. Eventually we got her down to 100 yuan, which is what we ended up paying for both.

We later learned after talking to Dr. Luo that we should probably have only paid about 50 yuan for both of them instead of 50 each. So for the next time we know a little more on how to barter. Even though we overpaid, it was still a fun experience because we were able to interact with Chinese natives, and practice our Chinese at the same time! Which the best way to get better at speaking Chinese; get more exposure to it.


One of my favorite experiences since being here was getting to see the Chinese Kungfu Show. The show was about the legend of one of their Kungfu masters. The show was full of fantastic acrobatic demonstrations as well as many dramatized fight scenes. The special effects of the show were also very cool. One of my current hobbies is martial arts, which is why this was so interesting to me. It was great to see a little bit of what Chinese fighting involves.

Kungfu is much more form based, as well as the principles behind it are more about peace than actually fighting. There were also many kids in the show with considerable skill in Kungfu. The discipline they have to train their selves to be that good is pretty amazing. It makes me wish I had started studying martial arts when I was a young child, especially because children are like sponges when it comes to learning. Overall, it really was just an entertaining show and a great exposure to Kungfu. 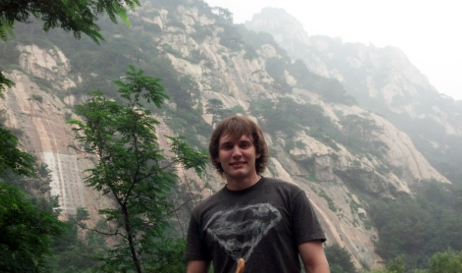 One of the most exhilarating yet terrifying experiences I’ve had since being in China was the journey up and down Mount Tai. Mount Tai is a large mountain that resides in the city of Tai’an. Our journey up Mount Tai started with a wild bus ride up to the halfway point. From the halfway point it’s supposed to take about two hours to get to the top. Of course being the fitness junkies that we are, Harry Schultz and I raced up the mountain in about an hour. It certainly was not an easy climb, but it was fun.

The steps were extremely steep at some points, almost to the point where you could actually crawl up if you wanted to. Even better, about 30 steps away from the top, it started down pouring. It made climbing up the rest of the way very difficult, we went from being hot and sweaty to being very cold and wet, very fast. Eventually we made our way to a restaurant to get out of the rain and wait for the rest of our group to arrive. There we had some interesting conversations in Chinese with some Chinese natives. It was great to realize how much Chinese we really have been learning. We eventually had lunch with the group at the top of the mountain, which was good, especially after the exhausting climb up.

The way back was even more treacherous though. It was raining cats and dogs out there. People were slipping and falling all over the place, it was very scary coming down the mountain. We had to tread very carefully, but we eventually made it down safely. At the end I was extremely wet and very tired, but I felt accomplished. It was a great adventure.

Posted by BloomsburgU at 1:13 PM