I couldn’t miss this opportunity

Tonight we and a few other foreign-student groups went to an acrobatics show in Beijing. I was very excited after hearing that previous students thoroughly enjoyed the performance.

We arrived early and were able to do some shopping and bargaining at the gift shops in the theatre lobby. Interestingly enough, in China almost all places that sell things are willing to significantly reduce the price of their merchandise if argued with. This skill ending up being crucial on every one of our journeys in order to acquire reasonably priced souvenirs. I was able to buy a chess set, a pocket watch, and a pair of chopsticks for a great price. Before long, the show began and the performers came rushing out. 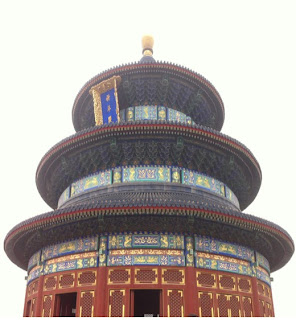 After some theatrical scenes we watched some amazing stunts. We saw a girl balance her entire weight with her hands on top of many chairs, which reached a height of almost twenty feet. There were women juggling multiple umbrellas, bowls, and blankets with their feet and men doing insane aerial stunts through hoops and a bunch of other things.

My favorite part was when they brought out a motorcycle and it rode around a spherical cage going fast enough to be inverted and seemingly defy gravity. But one wasn’t enough; they brought more and more bikes out until they fit eight, yes EIGHT, bikes into one small, congested cage. I was in disbelief when they were crisscrossing without making any mistakes as they sped quickly around the cage. Surprisingly, all of the daredevils made it out safely as the crowd erupted in applause. I remember at the “Bloomsburg Fair” there was a similar cage where only one motorcycle climbed the walls and people were amazed; China went big.

Today we went to the notorious Great Wall of China. Although I still wasn’t feeling 100% I couldn’t miss this opportunity. We went with some other groups of students via bus and arrived after about a two-hour ride. Before we arrived at our destination I observed that the area was completely surrounded by a beautiful jagged mountain range. It was similar to pictures I saw of the mountains in Colorado in the U.S. although these ones were covered in brush. We weren’t able to drive right up to the entrance so we got out and walked through various food and souvenir stands up to the Great Wall entrance. Some students, including myself, were able to take a cable car up to the wall; other students walked up the steps.

When we arrived at the top of the wall I was amazed to see the expansiveness of the Great Wall in person. It gave us a spectacular view of the valley below, which had grasslands and small towns and of the many mountains beyond the wall. We didn’t have a lot of time but we were able to walk along the wall for a while and go into the towers that were constructed every few hundred yards. Although the part of the wall we visited was redone in most parts, it was still one of the most amazing things that I’ve ever seen. After a couple of hours we walked down steps through the woods along the wall. We even saw two donkeys on the way.

We’ve now had three weeks of class, which consisted of four hours every day besides the weekends. It has been extremely intense but I’ve been able to learn so much more Chinese. After the first week, our classes have been spoken in virtually all Chinese, which has benefited my listening comprehension as well as speaking skills. My teachers are really good and I’ve grown to really like both my speaking and writing teachers.

Today after class we went to the location of the 2008 Olympics in Beijing, the “Bird’s Nest Stadium.” I believe it is now even considered one of the manmade wonders of the world. I can understand how it has gained such a reputation after seeing it in person. The architecture is stunning and I’m amazed that people were able to imagine and construct something that abstract.

We were able to tour the facility and, for a fee, one could drive around the track via Segway (although we didn’t do this). After a short visit and walking around the vicinity we returned via subway. The subway in China is very convenient. You are able to travel any distance one-way for only two Yuan, which is the equivalent of about $0.30! It really is the best way to travel throughout Beijing. The only downside is that during rush hour it becomes so crowded that you are squashed between people on every side. Luckily we barely experienced this as we timed our journeys around the most heavily populated times.

Today was our last day of class before our final exams. The past few weeks have really flown by and I’m getting anxious to leave; I’ve become very fond of Beijing, my classes, my classmates, and the culture in general.

Tonight my class and I took our two teachers, Hillary Laoshi and Shi Laoshi, to dinner at a place near Peking University. We successfully ordered our food in Chinese, which brought back memories of the first time we all unsuccessfully tried to order in the campus dining halls. Our teachers were even impressed by our increase in skill as compared to the first days of class.

We had a whole assortment of food including peanut-stuffed chicken, eggplant, eggs and fungus, dumplings, and many green vegetables. Dinner was served on a rotating table as it has been many other times and the food was simply amazing. After eating nearly everything and being very stuffed, Shi Laoshi bid his farewell and wished us luck on our exams. On our way out there were people painting intricate designs on ceramic animals and we all received one for free, probably because we bought an expensive dinner.

After dinner Hillary Laoshi and we went to Dairy Queen to see how it compared to the ones in the U.S. Most of us got ice cream but I got a fruit smoothie, which wasn’t very good. Everyone else said that his or her ice cream was very good and similar to the Dairy Queen in the U.S. The rest of the night was spent studying for the exams tomorrow. Hopefully we all do well and pass!

Today is Thursday and we had our finals for both of our classes. After four weeks of intense learning in both written and oral Chinese I was prepared for what my teacher tested me on. I was actually surprised when I realized how much Chinese I really learned over that time period. Both of the exams went very well but it is crazy to think that tomorrow will be our last day of classes here at Peking University. As a celebration for finishing the exams we decided to go to the Beijing Zoo and the aquarium within it.

We set off on our independent excursions as we usually do, by taking the subway. After a very short time period we arrived at the Beijing Zoo stop exited and went to the entrance. Everyone who came with was eager to see the Giant Panda exhibit so that was what we hit first. It was no surprise that almost all of the pandas were sleeping as they do for most of their day but we did see one panda that was awake, which was pretty cool. We were able to see a variety of animals including elephants, rhinoceroses, red pandas, wolves, foxes, and many more. I was not particularly impressed with the animals’ cage quality. Many of them did not seem up to par, at least of what I’ve seen in the U.S.

We hurried to the aquarium, which is the biggest inland aquarium in the world. Inside they had many exhibits including Great Barrier Reef, jellyfish, beluga whale, shark, and invertebrate. All of the aquarium sites were very cool although the beluga whale and jellyfish exhibits were my favorite. Although the zoo and aquarium were very cool I would not recommend it as the first thing one should see in China. It was extremely crowded and not much shade so it would be advised to go on a cooler day.

Temple of Heaven and Pearl Market

Today we went on a field trip with our group to the Temple of Heaven and afterwards went to the Pearl Market. We took a bus to the Temple of Heaven and went to a few different places within it. The spot we went to first was a place formerly believed to be the center of the Universe. This name is what gave birth to the country’s Chinese name 中国 （Zhongguo) or the Middle Kingdom, meaning that it is placed in the center of everything that exists. We continued and walked around to a few other buildings, which we were allowed to look into and take pictures. It was an area where many years ago human sacrifices would take place along with many other ritualistic things.

After the Temple of Heaven we took a short trip over to the Pearl Market. This market is one of the most famous in China and supposedly is a model for markets across the globe. As we entered we were practically attacked by people attempting to sell us everything from clothes to electronics. There were five floors of merchandise, which sold such a large amount of different things. On some floors there were crevices that objects would be hanging that people would stand in and sell the things. At other times there were just racks of clothes or stands that people would pace around and ask you questions. On the electronics floor there were series of glass counters on either side of the rows and people would stand behind them and let you test out all the different electronics. As was usual, we were able to bargain anything they offered us to lower prices than they started.

A lot of the products, specifically electronics, were usually not what they said they were. They would try to sell iPhones and other smartphones that were just not made by the company that was stamped on it. We knew this coming in so we were careful when buying anything. I was able to buy a few cheap things from some vendors but I was skeptical about anything they were selling so I didn’t buy much.