Teachers, we invite you to dinner 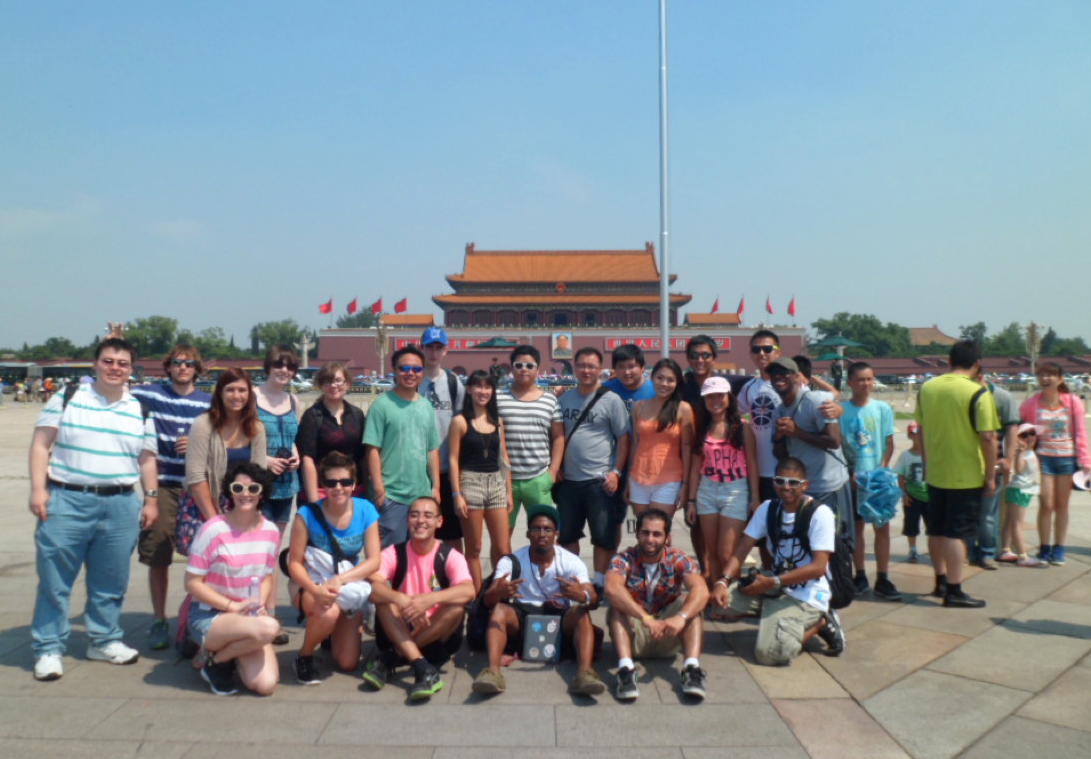 The day we climbed the Great Wall was a gorgeous one: Low humidity, warm temperature, and no visibility issues. The two-hour bus ride was worth the wait. When we left the city limits and entered the Mutianyu village, the surroundings reminded me of my hometown’s green countryside landscape.

Ashley joined me and we started to climb because we wanted to reach the top because we only had about two-and-a-half hours to walk around the Great Wall, buy gifts, and eat lunch at the bottom.

It was a very hot climb. I was drenched in sweat by the time we made it to the wall section. At the top, we walked around, took some pictures of fabulous views from the Great Wall because the skies were so clear.

It turned out to be a pretty relaxing rest of the trip because the surroundings were so nice and there was enough time to have a sandwich at the Subway after buying some gifts. I really hope I get to return to the Mutianyu section of the Great Wall in the future. It was a great time the second time around.

I can understand as a teacher it must be difficult to find time to have an organized dinner or lunch due to the work schedule and family. Luckily the only teacher who could not join us was Josh’s hanyu (general Chinese) teacher. So altogether it was me, my hanyu and kouyu (spoken Chinese) teachers, Josh, and his kouyu teacher.

The restaurant our teachers chose was one I was familiar with because I had eaten there once last summer. In fact, it was the same restaurant my teachers from last summer chose when I took them out to dinner for the final ethnic meal. It was a little restaurant known for its pear drink. It also served a cheese and custard-flavored dessert in the shape of a fish. As written in last summer’s blog, “Everything we ordered was delicious, and the cheese fish tasted like custard.”

Chinese dinner conversation was also good. My hanyu teacher was very lively. My kouyu teacher happened to be a substitute teacher for our last week because my real kouyu teacher had to leave for a conference. She was a little quiet during dinner, but I think she still had a good time. I found that I was much more comfortable with the language than last year. We talked about our classes, our upcoming final exams the next day, our experiences in China, and my previous teaching job. My teachers were very impressed when I told them that I often cooked Chinese dishes while I was living on my own.

All in all, it was a nice final ethnic meal. It’s one of the only times we could talk to the teachers outside of the classroom setting, so it was a great way to get to know the teachers on a more personal level.

Now that the program is over, it is time for me to go home and figure out what is going on next in my life. I had said before that I wanted a future with Asia, and a future with Asia I received. As of now, I will return to China next semester to work at SDUT for at least one more semester, and then I am considering possibly finishing a Chinese bachelor’s degree from BU since I already completed most of the credits.

Coming home to America even if it is for a few weeks after living in China for about six months is going to be a bit of an adjustment. I had gone home for a few weeks during the Chinese New Year holiday during the winter, and I remembered how quiet home was compared to Beijing or even Zibo. It was also very different seeing and hearing everything in English instead of Chinese after coming home for the first time being gone for a long stint of time. However, this time I would be coming home in the summer, so I had the nice weather to look forward to.

I think I will be back to Beijing in the future, if not the near future at least to visit next semester. I will remember all of the fond memories from this summer’s study program. I think this time was the best time around. I really liked our group, and just being more familiar with China and Chiense made the whole experience better. 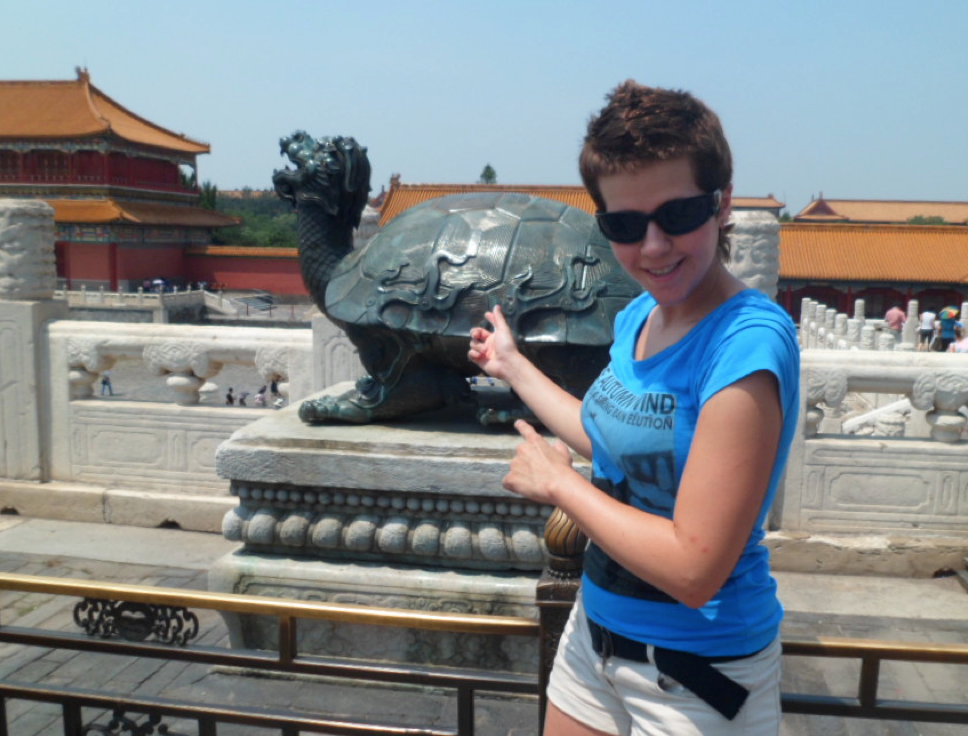 I decided to try to get a haircut in Beijing. I had gotten my hair cut in Zibo, the city I currently work in, but I wanted the Beijing experience!
I also paid a little extra RMB to have an experienced barber, a head massage, and tea. April, Harry, and Devin also all accompanied me to the barbershop because they also wanted the Beijing haircut experience. I also helped the others translate what they wanted for their haircuts, but they seemed to do okay without me this time.

The Chinese barbers really took their time cutting and styling our hair, and the overall experience was very relaxing. This was very unlike the barbershops in the US where they try to finish a simple haircut job as quickly as possible. We arrived at 7:30 p.m. and did not leave until about 9PM.

It was nice to have some Chinese conversation with the barbers. They were friendly and very interested in cutting our foreign hair. It was funny to see all of the black hair around the barbershop excluding the places where we sat.

April and I were very satisfied with our haircuts. We even all managed to get a group picture before we left so we could remember the experience. Hopefully I will be able to get another haircut in Beijing in the future.

The Beijing Hutongs were a sight to see at 南锣鼓巷Nanluoguxiang. Also it was not a far subway ride from Peking University. Some of the features of the Nanluoguxiang Hutongs are a main street with many restaurants, stores, an old Beijing feel, and not to mention, many Chinese and foreign tourists.

I had visited Nanluoguxiang during previous occasions in Beijing, so I was somewhat familiar with the surroundings. I ended up checking-out some of the stores to see what kinds of merchandise could be found. I ended up buying some strong Chinese Oolong tea at a cute little tea store.

The group then ate at 烤肉季 kaorouji, a Chinese restaurant famous for meat dishes. It was a delicious except for the 香菜 xiangcai they put in the barbeque meat dish. This is one spice similar to parsley only with a strong, bitter flavor that I do not like in Chinese food.

This is one place I’d recommend to anyone traveling Beijing to see because it is very unique from the other places we’ve seen in Beijing, and the Hutong street structures date back to when Beijing was a much smaller city then the mega metropolis it is today.

Just about everyone in the group loved the acrobatics performance. Even though I had seen the show last summer, I still could not keep my eyes off the stage (except to take an occasional picture).

Several acts have previously won acrobatics competitions in Russia and France. It was a pleasure to see these internationally renowned acrobats perform again. The opening act was a woman who climbed up several chairs stacked on top of one another and then doing contortionist acts while balancing at the top of the structure.

Other notable acts were two men who could climb stairs while standing on one hand, a group of women who could make a human pyramid while the women on the base riding bicycles, and eight motorcyclists who drove together in a limited spherical space. Based on the audiences’ gasps and applauding, most thought that this act in particular was the most nerve-wracking and exciting one to watch!

Posted by BloomsburgU at 7:15 AM