Though hard for me to believe, I have been a college student for over a month. It has not taken much time to get acclimated to campus life. For the first two weeks, it seemed slightly overwhelming with all of the club interest meetings and finding time to joggle class readings with tangible homework and than tossing in eating, sleeping and actually attending lecture, but I quickly developed a routine. 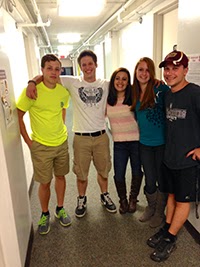 So far, I have run into no problems with my meal plan and am glad that I picked the smaller plan. I always eat breakfast in my room, I normally eat lunch in my room and than I eat dinner at the dining halls with friends. I enjoy eating lunch in my room for it forces me to do homework instead of spending the hour in between classes socializing. By the time dinner rolls around, I normally have the majority of my work done and I can afford an hour of socializing.

When I do eat in the campus facilities for dinner, I normally eat at Scranton Commons. There are many different choices and the selection helps to keep my food options exciting. The Commons, as it is often referred to, has many stations that rotate the choices. My favorite is the soup, I have a bowl nearly every day, and the pasta station.

When I eat lunch on my meal plan, I often choose Subway. I have eaten more Subway in the month I have been here than in the last two years combined. Since I get a six inch sub, it is only a few cents over my meal swipe (the dollar figure assigned to a meal on the meal plan).

The one thing I have not been able to experience yet with dining is Monty’s restaurant night. Monty’s, on upper campus, is transformed into a sit down restaurant. Unfortunately I have a Wednesday night class, so maybe next semester.


I have not experienced much of what the downtown has to offer as of to date. One Sunday morning, a group of friends traveled down to Blooming Bagels. I enjoyed my bagel, though I must say it is large. I struggled to eat the second half of the bagel, but I guess that just means it is worth the money. 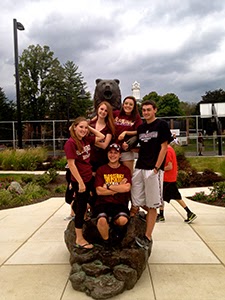 From the second I entered the restaurant, the aroma filled the air and I was ready to eat. By far my favorite place downtown is the frozen yogurt shop. I have been there multiple times and am working my way to a free cup on the stamp card. I have not yet visited the shops downtown.

Hopefully by my next blog I will have visited a few shops and the burrito shop! It is convenient to have downtown Bloomsburg only a few blocks away, especially late on the weekends when you get a food craving.


A group of my friends made the drive over to Kutztown to support the Huskies football team. It started on an adventurous note when my GPS decided to take us on nearly all backroads. At one point we traveled a one lane dirt road for close to five miles. It made for some laughs and us praying that we were not part of a horror movie.

Once we got to the game, the Bloomsburg section was full. One of my friends found it to be a bright idea to invade the Kutztown side and cheer loudly for the Huskies. The people surrounding us stared every time the Huskies pom pom was waved in the air and we were screaming loudly for Bloomsburg, anything to support Bloomsburg!

Last, But Not Least, The Fair 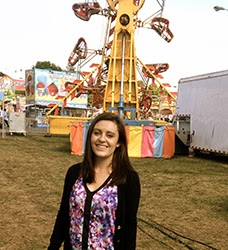 This year is my first time at the Bloomsburg Fair. I walked down to the fair, for I went on a day that the shuttle was not running.

The walk was not bad, though it seems far away.
Before I made any purchases, I looked at everything that the fair had to offer. The games do not strike my interest too much; I find them to be a waste of money. I went to the fair for the food.

A week’s worth of calories were consumed in a matter of two hours. I started with old fashioned lollipops, than purchased cream soda from a tap. These were my starters, I tried wings for the main food of the night.

There was homemade ice cream that they were making right at the fair. I tried peanut butter and it was by far the best ice cream that I have ever had. I thought that I was done until I passed the beef jerky stand. Of course I had to try one, it did not disappoint. As you can tell, I highly enjoy food.

To finish this blog I will end with the most interesting thing I saw at the fair. There was a small “zoo” set up under a tent. At the “zoo” you could hold and get your picture taken with a baby kangaroo. I find this to be nearly one of a kind to the Bloomsburg Fair!


— Morgan Lewis is a biochemistry major with a pre-medical studies concentration.