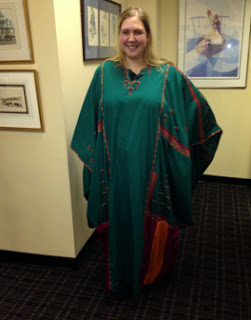 The first thing we did was to get to know each other. All 10 of the fellows are each from a different state, so we are all very diverse! Despite our differences, we are all passionate about the Middle East and we quickly became very comfortable with one another.

We went over some dos and don’ts in Saudi Arabia. For instance, I learned that it is rude to show the bottom of your feet to people and you should avoid eating, passing things, or doing other actions with your left hand.

Also, men do not touch women outside of their family so instead of shaking hands when they meet the female in the group, they put their hand over their heart to show respect without physical contact.

After we spent the afternoon together, we were dismissed. Tomorrow’s flight leaves at 6 p.m. and will last about 12 hours. Until then, I’ll just be chilling in this overly large chair in the lobby of my hotel.

Posted by BloomsburgU at 11:37 AM No comments: