Dwarfed by the beauty of the natural world 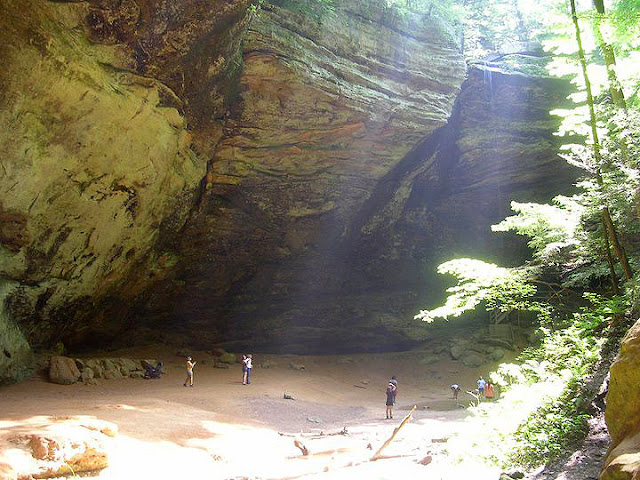 After 10 days in the field, we had our first day off from digging and had an opportunity to venture to a different part of Ohio. We packed up some hiking gear, plenty of trail mix and piled into the vans to see Ash Cave and Old Man’s Cave in Hocking Hills State Park.

It was refreshing to see the forests and waterfalls, a stark contrast to the open fields and hot sun that we’d grown accustom to. At Ash Cave, there were audible gasps of amazement as we wandered into the immense rock shelter. It was shocking to see something so large and beautiful. For eons, water and wind carved the soft rock and left this 700-foot-long cave.

The human influence, little trails and names carved into the stone walls, were dwarfed by the beauty of the natural world. It was strangely freeing to feel so small in the shadow of that cave. I realized that if I’m so tiny in the grand scheme, my worries are even smaller and it felt like a burden was lifted.

That carefree feeling set the tone for the rest of the day as we explored more of the park land. We ventured to Old Man’s Cave, which proved to be an excellent hiking and climbing spot. We spent the day clambering over rocks and wading through streams.

As the entire field school group stood knee-deep in a plunge pool and skipped rocks into a waterfall, I forgot that we had just met each other a mere two weeks ago. Laughter and jokes rang out across the water, and we all agreed that the hiking trip was exactly what we needed to recharge. We snapped plenty of pictures and were pleasantly exhausted by the end of the afternoon.

I returned to camp ready to dig again the following day, hoping that some cool artifacts would surface from the new units we had opened.

Posted by BloomsburgU at 6:38 AM