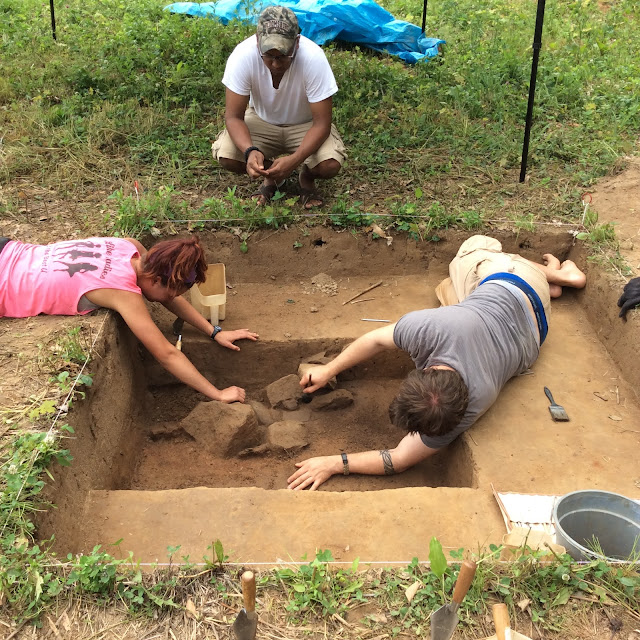 When we first arrived at the Balthaser Home site in Ohio, it looked like any other farm field, the remains of soybean stubble covering the rolling hills. Now, the field is covered with tripods and sifters and tarps and shovels.

From the road, it’s nearly impossible to tell what is occurring in the southwest corner of Balthaser. What are we doing here? Spearheaded by Dr. DeeAnne Wymer and Dr. Paul Pacheco of SUNY-Geneseo, students from Bloomsburg and SUNY Geneseo are collaborating to dig up the remains of a domestic Hopewell site. The Hopewell are an indigenous American people known for their earthworks and ritual sites, but little is known about their daily lives. 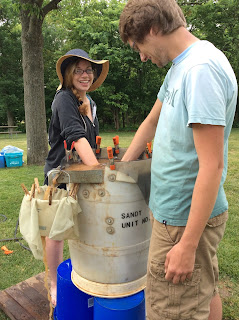 Out in the hot sun, we dig and sift. Occasionally, someone will yell out “bladelet” when they find a small, thin flint blade, still sharp enough to cut your fingers 2,000 years later, and Doc Wymer does her famous bladelet dance.

The best part of field school is the shared enthusiasm among the students, professors and the occasional amateur archaeologist visitor. You’ve never seen a group of people so excited about different colors of dirt. Students are broken into different teams composed of Geneseo and Bloomsburg students to excavate specific unit. Because of the generosity of Dr. Jarrod Burks, we are able to have a sense of where to dig based on the magnetic readings at the site.

My team is in the process of excavating a pit feature, which is very exciting because we have no idea what we may find.

(DeeAnne Wymer) - I am pleased to note that Keelan's team recovered a large number of very large fragments of pottery from their fire pit/earth oven! All their hard work paid off and they have every right to be very excited.

Some groups are meticulously excavating post molds, which may indicate the location of a Hopewell house, while others find projectile points, ceramics and paper-thin sheets of glittering mica. Centimeter by centimeter, we begin to get a clearer picture of the ancient lifeways of the fascinating Hopewell.