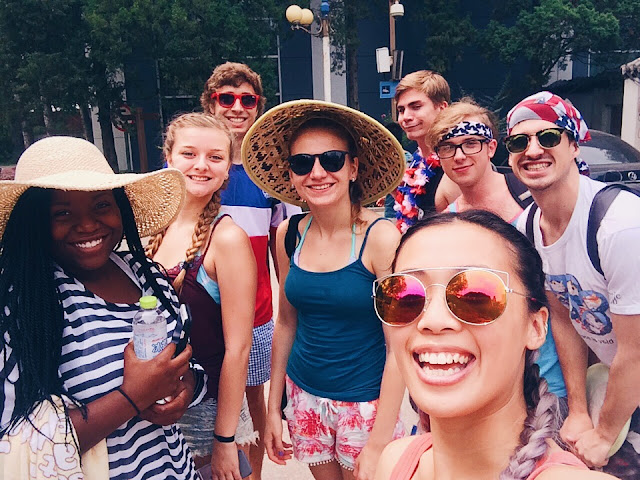 Two weeks ago I traveled to Dalian to visit a friend. Felicia was a visiting scholar at Bloomsburg University last fall semester and when she found out I am in China she invited me to visit her. To get there I took a 6-hour high speed train. The train was very comfortable but a little too cold for me. During the summer in most of the places in China we pray for an air conditioner, but on that train I was freezing the whole time.

Once I arrived in Dalian Felicia and her husband were waiting for me at the exit. When we got to their apartment Felicia gave me a little care package with towels, pajamas, sleepers and even a toothbrush. The next day we drove all over Dalian to Felicia’s favorite places and took lots of pictures. She introduced me to her friend’s daughter, Shellmy.

During that weekend Shellmy and I became good friends and planned to travel to Qufu, hometown of Confucius, the last weekend of July. In Dalian we visited a place called Little Venice. There are multiple canals around the downtown of Dalian where anybody can go on a boat ride. Felicia also took me to meet her sister that lives right by the beach. 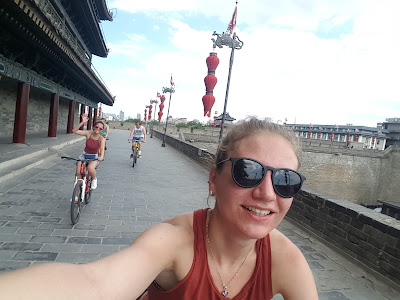 When we went to the beach, even though it was really hot, I didn’t see too many people tanning. Most of the women in China don’t like to tan. There is even a saying for women “bai fu mei” which means white, reach and beautiful and for men it’s “gao fu shuai”, tall, reach and handsome.

Dalian cuisine specializes in seafood. Just in two short days I tried a variety of fish dishes such as boiled muscles in a sea shell and pumpkin fried crabs. If I ever come to China again I will definitely visit Dalian.

Just last weekend our whole program traveled to Xian for four days. One of my favorite parts about the trip was a 13-hour overnight train ride. Since we came as a big group, it was really fun to just play card games and talk. After we arrived and settled at a hotel, our tour guide took us on a City Wall tour. The City Wall used to be used for protection against enemies, but now it’s an important historical monument of Xian. Then instead of walking the 9-mile City Wall we rented out bikes and rode around the whole City Wall.

It was really fun and mesmerizing but it was really exhausting to ride the bikes in near 100-degree heat. When we had free time, we went to a market street. There they sold all types of souvenirs and foods. Xian is famous for “rou jia mo” which is meat sandwich and for their noodles. There were people stretching super long noodles right outside of the restaurants to attract more customers. 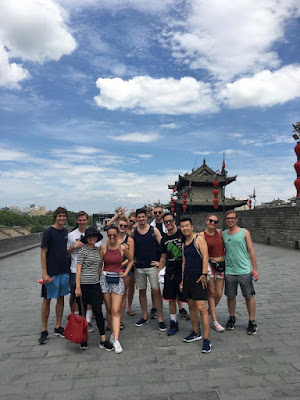 The next day we went to see the terracotta warriors. The site is divided into 3 pits with over 10,000 warriors. The 1st pit has 6,500 warrior statues and is the biggest one out of the 3.

Each one of the warrior statue is different from the others because it was sculpted by a real terracotta warrior. Our next stop was the Giant Goose pagoda. Right next to it there are multiple Buddhist shrines which are open to the public. In the evening many people gather on the square in front of the Giant Goose pagoda for group activities.

Every park in China has activities mainly for retired people, such as dancing, card games, martial arts, etc. When we went to the square at night we were welcomed to dance the traditional Jiao Yi Wu dance with the locals. So far everywhere where I have traveled, the foreigners are always welcomed.

Right now I am a little sad because I only have two weeks left in China, but at least every single remaining day is planned so I will not waste a minute of my time here. This Saturday we will be taking the HSK 4 test, which is a standardized Chinese language knowledge test. I really hope that I can pass so that I can apply for internships in China. My last weekend in China I will spend traveling to Qufu with my friend Shellmy and my roommate. Ethan, one of the Chinese students in Bloomsburg, is also there for the summer and he will be able to show us around Qufu.

Timofeeva is studying abroad at the Beijing Foreign Studies University this summer, courtesy of several scholarships earned this past year. She received a Professional Experience grant from Professional U, a grant designed for students seeking to get involved in their career path or learn more about the world. Timofeeva also received an International Faculty Association scholarship dedicated to students with interest in fostering globalism and internationalism. Moreover, she received College of Liberal Arts study abroad scholarship and a scholarship for good academic standing from the university.

Posted by BloomsburgU at 6:41 AM