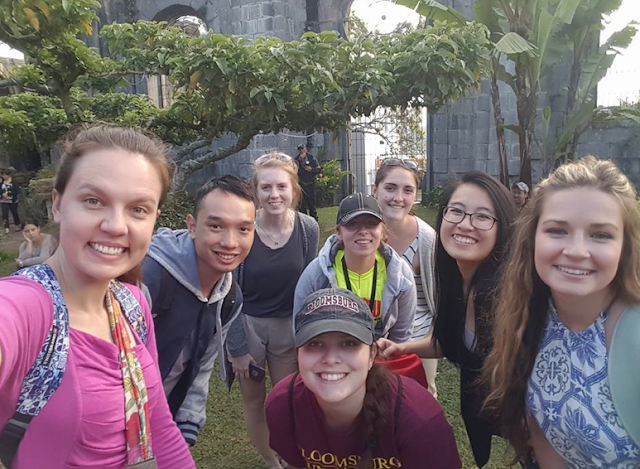 
Left for Newark airport at 2:45 a.m. Of course, upon arrival, my suitcase was 3 pounds over, so I had to fix that, and squeezed by at a close-call 49.5 pounds! Departed for Fort Lauderdale around 6 a.m. Then, departed from Fort Lauderdale to Costa Rica. Landed around 1:45 p.m. (which is actually 2:45 p.m. because they are an hour behind due to not observing day light savings time). Couldn’t find the SOL people and was bombarded by Taxi Drivers. Eventually found Angie. Amy, myself, and another #SOLmate were quickly put into a car to be taken to our host families. The driving in CR is similar to NYC. Almost crashed a few times. We eventually made it to a neighborhood called Mira Flores. We met our Mama Tica (host mom) Cecilia. She was so excited to meet us. She made us a banner in our room saying “bienvenidas Amy and Kylie,” which means welcome. The house is adorable just like Mama Tica! Mama Tica made us sandwiches for lunch that afternoon, but before lunch Amy and I gave her our gifts. Mine was a thirty one bag embroidered with teaching icons and her name (courtesy of Brenda’s Embroidery) and a Bloomsburg pen and sticker. After lunch, Mama Tica took us for a walk to our Universidad that we are studying at this break. Then, we walked across a long cat walk to the mall (Paseo de las Flores). She took us around the stores, naming different items in Spanish, then we walked back home. She made us a delicious dinner (chuletas de cuerdo, broccoli y arroz). During dinner, we met one of her daughters, 2 grandsons, and her neighbor. After dinner, I wanted to get a shower. I had some mishaps with the shower and the hot water so that was interesting. After my shower, I went to sleep because I was exhausted from traveling all day. 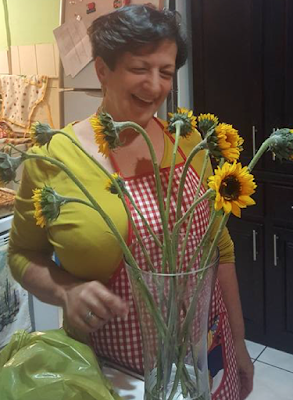 Today, I was woken by a train around 5:50 a.m. but luckily I fell back asleep. We woke up to a delicious breakfast ((huevos, pan, jamon, plantanos fritos, plantanos y manzanas) where I tried plantains for the first time (Not really a fan). We started school at 8 a.m. I am taking a class about Latin American culture and civilization. There are about 12 of us in the SOL program right now. I met a lot of cool people! At this moment, I am pretty overwhelmed with all the Spanish, and I am having a hard time comprehending what others are saying and even speaking myself, but hopefully with time that will change. For class, we mostly went over the syllabus, expectations, etc. (the usual first day stuff). Our teacher is super passionate and caring. The teaching style is a little different than the US. The teacher is sitting relaxed in the front of the room, kind of close to the first row of students. She touches your head, holds your hands, calls you sweet nicknames like mi amor. During the break, we got our official student ID cards. After class, we had orientation and sat our by the football field. Let me tell you how nice it is to have the warm sun beating down on you, wearing sandals and a tank top in December!

For orientation, we were assigned a scavenger hunt. We had to find the office depot to make copies of our passports and to exchange our US dollars for Colones (the exchange rate is approximately 548,00). The conversion is actually kind of hard to understand so thankfully there is an app that can do it for me! After completing the scavenger hunt, the #SOLmates roamed the mall, looking at souvenirs, and trying to figure out how much everything costs. After that, we split up by neighborhood and went our separate ways. Tonight we had a variety of different foods (pork loins with gravy-like salsa that had mushrooms and black pepper, white rice with seasoning, yuca [super delicious and nutritious, pictured on the left with Mama Tica], and creamed spinach soup which had about 5 different vegetables in it, but I didn’t catch everything she was saying). We sat out on the porch tonight to eat. It was very tranquil. Everyone passing by said hi, whether our Mama Tica knew them or not [and let me tell you, she knows just about everyone]. Today was interesting with the public aspect of being immersed in the culture, but it was culturally eye-opening. It was different to see the way the people interacted with foreigners like myself and fellow students, some nice, some not so nice, just interesting. Also, Mama Tica gave Amy and I a very inspirational speech and a quote to live by. The gist was saying to love yourself, enjoy yourself, love life, etc. PURA VIDA! But she kept saying “yo me amo” which means I love myself. She said we all have eyes, noses, arms, etc. and we are all equal so just love yourself, nothing else matters. It is very inspirational because I went on this trip to not only finish my Spanish minor and be immersed in the language and culture, but also for myself as a reward for my hard work in school, work, and play.


Today, we woke up to yet another delicious breakfast. (see picture) Amy and I met Nikki and walked to class. During class, we learned about the different theories of the continents’ movement throughout time. I am definitely still trying to get a hang of the speed of the professor’s speech. After class, we took a bus (CRAZY DRIVING!!) to the city of Heredia. It was a quaint little town, full of people. Our assignment was to find different, unusual fruits in a supermarket. That was interesting because there were so many different stands of fruits, and everyone person I asked said they didn’t have mine (of course, no one had my fruit!) After buying the fruit, we walked through town to the oldest church, built in 1797. It was the center of town, so there were many people around. After touring the church, we continued our way through the town to a café, where we were given a choice of a fruit smoothie or cold cappacino (I don’t like coffee, so of course, I chose the smoothie). We sat around the tables and tried each unusual fruit. I did not like most of them, because some smelled like trash, had a mushy or super crunchy texture, or had a bitter, sour taste. (see below for different fruits and pastries). After fruits, we tried 3 different pastries, and then, we were left to our the city in groups. My group got ice cream at a popular shop across the street. Then, since it was pushing time to get dark, we headed for the bus stop, stopping along the way to look at shoes and jewelry. Then, we got on the bus, shared photos of past experiences with each other, and talked about home life. After we got off the bus, we walked through the mall in hopes of finding souvenirs, still no luck. Tomorrow will hopefully be exciting. Our group is planning on going to the ruins nearby. Stay tuned!! 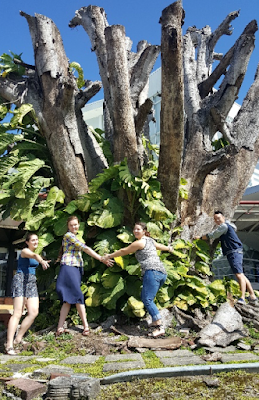 Today I started off the day with a bowl of granola and fruit. I tried papya for the time. Let’s just say I was not a fan. Amy and I met Nikki and walked to class. Today was a little easier to understand as we begun talking about human evolution. After class, 10 of us went off to explore. Our first stop was San Jose, CR. It is huge! We had to find the bus stop to get to our final destination of the Cartago ruins. I saw a guy playing music with recyclables and he was amazing! Eventually, we found the bus stop and took it almost an hour to Cartago. Our friend Kendra met a lady and her son on the bus that spoke some English. So, they helped us to get to the Basilica. The Basilica was a huge, beautiful church full of people. On the side was the area for purification (see photos). People wash their faces in the water to purify themselves of sins. We talked with the lady and I asked her to tell us the story of the indian and the woman behind the gate (in Spanish). Then, we watched her son, Patrick (actually is a freshman in college in Missouri) wash not just his face but his entire head, long locks and all.

After visiting the Basilica, our group headed the other way towards the ruins. Along the way we stopped and ate quesadillas. The ruins were decorated beautifully with flowers all over the landscape. After we visited the ruins, Amy and I bought Mama Tica flowers as we headed for the train station. Throughout the city, I saw prostitutes and pimps, sleeping dogs (literally just laying along the road), and had an funny experience at a chicken shop. A friend ordered ice cream and received onion rings instead, and another friend that ordered ice cream received orange tea. Needless to say, I don’t think they are the best at ordering ice cream. We took the bus back to our town and had a connection along the way. It took almost two hours. I thought I was going to barf! We eventually arrived back home, walked Clement and Nikki home, and ate dinner. I don’t really know what I ate, but it was delicious! It was sort of like a lasagna without noodles, and zucchini on the side. We talked with Mama Tica for about an hour. Now, I am off to an early night’s rest because we go white water rafting tomorrow and have to be up at 5:15 a.m. Sweet dreams everyone!


Today started off at 5:50 a.m. We met at the University and took a bus to a town called Limon about 3 hours away. The ride was miserable. I got so nauseous. When we arrived in Limon, we began the adventure of the day: White water rafting! It was absolutely amazing. We rafted down the Rio Pacuare. Our tour guide’s name was Juan. He was hysterically funny, but made us feel completely safe at the same time. First, we picked a team name: Team Rapids. Then, he gave us all the commands we needed to know to keep us safe throughout our journey. My favorite call was Oh Mierta! (you’ll have to figure out what that means for yourself ) The trip was 29 kilometers, approximately 3.5 hours, and had beautiful scenery (stay tuned for pictures) At times it was really scary; we lost 2 people off our raft. Luckily, it was a safe area. However, during a class 3 rapid, a girl fell off the raft in front of us. Thankfully, our team cameto her rescue before she got sucked into the class 4 rapid. All in all, the trip was so much fun!