A rich five days in Belfast 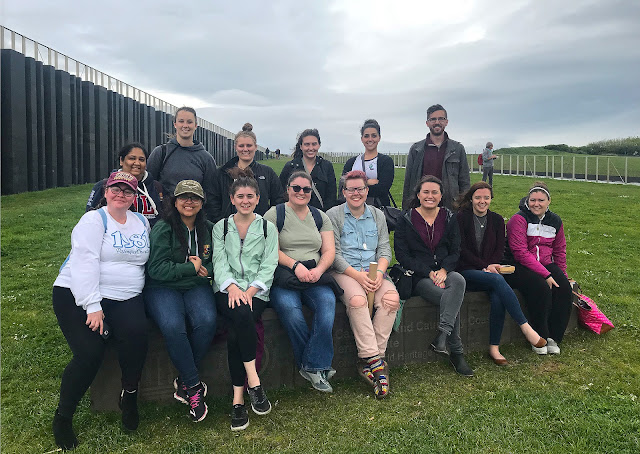 Before arriving in the city at Stranmillis University College, where our accommodations were, we spent a fruitful day trekking along the northern coast to see The Giant’s Causeway and the Carrick-a-Rede Rope Bridge. These locations had stunning views of the North Atlantic Ocean, rolling countryside, and rural Irish culture. As jokingly referenced by the locals, our company seemed to have packed clear skies and sunshine in our suitcases, as beautiful weather followed us to each new site.

Our first exposure to Higher Education in the UK came when we visited Ulster University, which is the second largest university in Northern Ireland, consisting of four different campus locations. We had the opportunity to experience two of these campuses; their urban campus in downtown Belfast and their rural campus in the seaside town of Coleraine. At the Belfast campus we heard inspiring presentations from Admissions, International Studies, and Career Services professionals. Since the Belfast campus is academically focused on art, we had the opportunity to see a remarkable amount of student work around the institution. In addition to allowing students to showcase their creative endeavors, the institution proved itself to be forward thinking in how it widened participation to under-represented student populations in the UK. We continued to learn more about Widening Participation at the second Ulster University campus in Coleraine.

At the Coleraine campus we were hosted by Provost Karise Hutchinson and her spectacular team. Karise sat and shared the authentic story of her journey through Higher Education and Coleraine to reach her position, and the trials that she faced along the way. Her colleagues shared their outlooks in their functional areas and we spent the day not only learning about how they work, but also drawing on our learned experience in the CSA program to share our insights, ideas, and suggestions for improvement. That afternoon we spent learning and playing Gaelic Football with individuals in the athletic department. Their athletic department is working on becoming a more inclusive area for students and less focused on the highly competitive aspects we know in the States.

In the middle of the week we found ourselves at Queen’s University in Belfast, which is the largest university in Northern Ireland. This was the first institution we visited that had a Residence Life department akin to those we have in US. Like us, they have a hierarchy of professional and paraprofessional (e.g., Community Assistants) staff. Unlike the U.S., however, the CAs’ primary responsibilities at Queen’s are focused on building community, with minimal focus on policy enforcement or crisis response. Other functional areas at Queen’s also discussed the importance of student inclusion around campus, especially because they have a high population of international students. This was made evident when we met with Stephen, the Student Union president, when he articulated the plan for making the Student Union building more accessible to all students. Many of the institutions we have visited this far have this same goal to create inclusive and accessible environments for their students to thrive.

Throughout our time in Belfast, we witnessed firsthand the political pulse of the community and the people living within it. Our cab drivers (who number well over a dozen), frequently shared personal stories about their lived experience during the “Troubles,” which was a decades-long period of violence, stemming from Northern Ireland’s status as a province of the United Kingdom, rather than a part of the Republic of Ireland. While we were assured that the bloodshed had long-since subsided, reminders of this period echoed in the memorial plaques affixed to the sides of buildings that were bombed, the exhibitions that filled the gilded City Hall, and the gates (nightly locked) positioned at strategic points along the ironically named “Peace Wall,” that separated politically opposing groups. In spite of these things, we found the city of Belfast to be remarkably welcoming, with a cultural atmosphere that exceeded all of our expectations.

Smith and Gowin are pursuing their Master's in Educational Leadership through Bloomsburg University's College Student Affairs (M.Ed.) program. They are among a group of CSA students studying abroad this summer for two weeks in Ireland, visiting several universities to develop an understanding of the structure and practice of college student affairs in Ireland and gain insight into international issues.