Spectacular views and a few tears 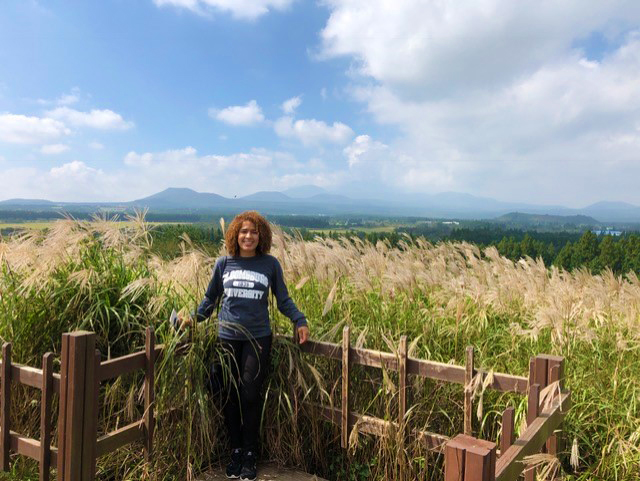 We’re getting close to midterms here. And since my last blog, I’ve had the most fun and rich learning experiences in my life. It’s been over a month since my landing, and I can truly say I’m coming back to BU a little different. Three typhoons have passed by Korea — the rainy weather reminded me of Bloomsburg, so I haven't been homesick 😂 … but the typhoons haven't stopped me from experiencing Korea. 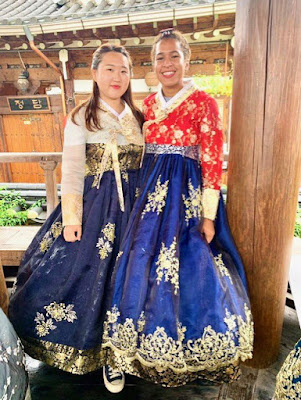 I’m part of a travel club, and we traveled to Jeonju in late September. We stayed in a traditional Korean house, in a Hanok Village with houses dating back to 600 years ago. It was a humbling experience to sleep in such a historic house and town.

My club dressed in traditional Korean clothing called hanbok and walked around the town. I felt like a princess, and it was so fun — all of the guys dressed up as girls. After returning to the university the following week, I fully grasped how to read in Korean. I’m still a bit slow at it, but I’m proud of my progress. I think being in a setting where I don’t fully understand what people are saying has made me become a better listener.

Back in the states, I was told by my friends I spoke too much about myself and that was something I wanted to work at to become a better person. My experience here has given me just that. I have to listen more closely to other people to find a few words that I know in Korean. Also, because I want to get to know my fellow Korean classmates more, I ask them more about their life and minimize my talking about myself. This personal growth is going to allow me to be a better physician assistant for my patients.

The day before heading to Jeonju we took a trip to the Independence Hall and the Gakwonsa Temple. The Independence Hall ignited my love for history. I knew so little of the colonization of Japan and of the atrocities they committed to the Korean people, I felt ignorant, but I’m glad I became more informed. Following the museum, we headed to the Gakwonsa Temple where I vowed to the Buddha three times and felt an immense sense of peacefulness. My trip made me realize I love culture and history. I’ve always been interested in museums but did not think it was love but rather an interest. My experience is making me consider pursuing a Ph.D. in anthropology after I establish my career as a physician assistant. The world has so much to offer for me to just stop learning after graduate school. And so my conquest on expanding my knowledge continues. 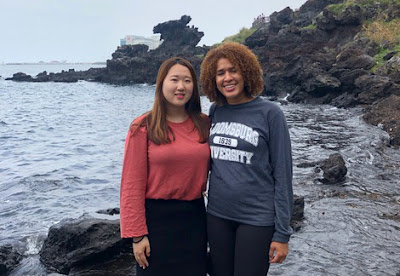 Just last week, I visited the majestic and beautiful Jeju Island along with my Korean roommate. I got the opportunity to eat dinner with a 할머니, an elder Korean grandmother my roommate knew, and truly experience the seafood cuisine Jeju offered. The views were so spectacular, I shed a few tears.

Part of Jeju Island still is Udo — a smaller island only 10 minutes by boat from Jeju to reach. When there I went to a lighthouse, it took forever to get up there and the day was super windy too. Fighting through the wind and exhaustion, we made it. I saw the whole island of Udo from that standpoint. That is something I never in my life thought I would be able to see. The view from the lighthouse made me realize why I want to become a physician assistant. I wasn’t completely sure of my career path before this experience, but now I am. I want to become a physician assistant to give people health and the opportunity for them to see what I saw that day.

The natural beauty of nature and the peacefulness of the sea was soothing, made me forget I was even studying abroad. We’re always bombarded by social media and are in a rush to do things because of our busy schedules. But what I’ve realized is that it’s okay to disconnect from that world and go into another. Life is really short and it’s hard to do everything you want to do, but if you just value yourself a little more, you’ll know a little time.

— Liz Hernandez, a health sciences and sociology dual major, is studying abroad this fall in South Korea at Korea University in Sejong, studying such topics as North Korean socio-culture and human rights, as well immersing herself in the Korean culture such as experiencing Chuseok and learning to cook japchae.

Posted by BloomsburgU at 11:54 AM No comments: